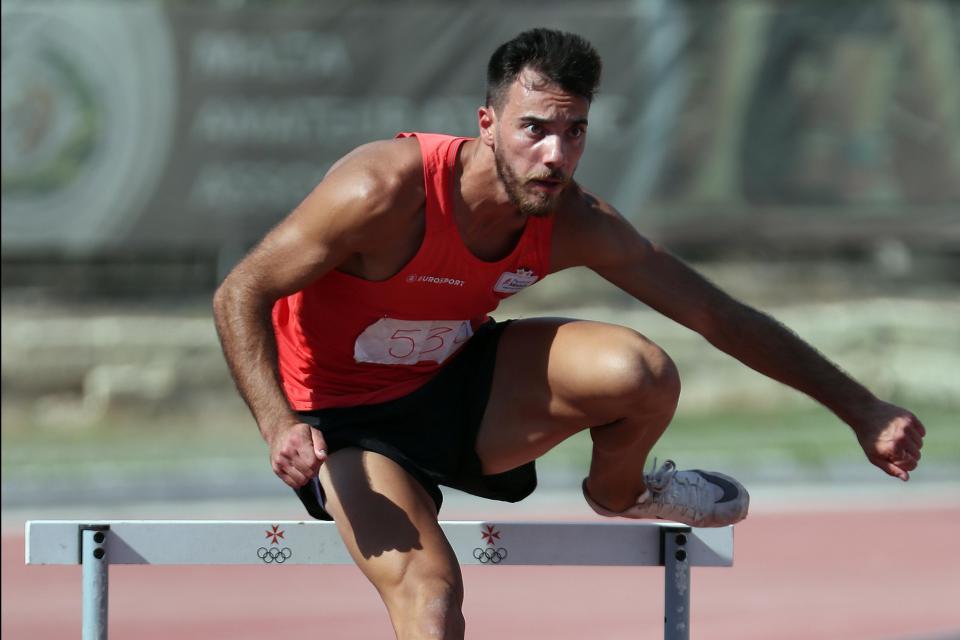 Pembroke Athleta’s Daniel Saliba broke his own National Record in the 110m hurdles male category as he lived up to high expectations among the local athletic community after his performances earlier this month, clocking a fantastic 15.50s finish time.

As the athletic season is approaching its end, it was another eventful athletic Challenge yesterday afternoon at the Matthew Micallef St John athletics track.
In the throws, St Patrick’s U/18 Mireya Cassar established a new best overall performance in the Shotput. She improved her former best performance by 8cms with a throw of 13.42m.
The 400m woman was solely a Janet Richard (Pembroke A.) affair. She won in style in a fast season best of 54.54 very close to the 12-year-old record of 54.29 set by the then Tanya Blake.
The surprise of the day arrived by Zimbabwe national Lloyd Tadiwanashe Mhiripiri, a rugby player coached by Mario Bonello, who managed a double, edging Starmax favourites Elaida twins with a 10.94s in the 100m and again in the 200 beating Omar Elaida and Luca Farrugia (Rush) in 22.45s. This race also produced an impressive timing by Paralympic athlete Antonio Flores (Zurrieq Wolves), whose 12.84s would have qualified for a National Paralympic Record in the T64 category had wind-assistance not having exceeded the allowed limit.

Claire Azzopardi (Pembroke Athleta), winner of various doubles in the 100m and long jump this season, improved her 100m personal best with 12.03. Yet this was not enough to beat the stiff competition of foreign guest Rebecca Chapman who won the 100m race in 11.95.

An impressive performance which delighted the crowd was by Raptorz Running Club’s Dillon Cassar, who debuted in the 1,500m with an impressive 4:05.16, 8 seconds clear of 2nd placed Jean Paul Debono. This result was even more remarkable considering that Cassar had run – and won – the Fastest 5k race on Friday evening, a truly impressive recovery.
MAAA President Andy Grech expressed his delight at these results: “This was just incredible! Our athletes’ performances are reaching new levels every week, throughout the different events we staged. Every week we have new athletes performing national records, the pandemic and all the downfalls it brought with it, is now only a horrible memory. Well done to everyone athletes, coaches and spectators alike!”

Charlotte Wingfield compensated in part the delusion of the 100m, where she finished fourth, with a victory in the 200m in a 25:07, distant time from her national record. Here she edged out her fellow club mates Sian Pledger 25.82 and Rachela Pace 26.10.

In the long jump man, Ian Paul Grech (Pembroke Athleta) had a good leap of 7.07m. Rebecca Chapman made a double with a 6.20m jump in the Long jump women. Both Claire Azzopardi and Rachela Pace (Pembroke Athleta) performed up to their standards with 5.91m and 5.67m jumps.

In the 400m man Luca Farrugia (Rush) had the best of his opponents in a positive 50.13s timing. The 800m man was a solo run by a massive performance of Pembroke Athleta Christian Luke Chetcuti who established a new Seasonal best of 1:57.01 and a new personal best.

Rush ACs’ Luke Farrugia and Luca Martini, who both set national records in the past few weeks, registered another positive performance with 51.59m and 55.59 throws in Discus and Hammer respectively. U/16 Kareem Chouhal (Rush AC) threw a remarkable 40.17m in the hammer event.

The next appointment for local athletics is for Saturday 25th July starting at 1645hrs and is the Young Athletes’ Meeting 6.