By Antonella ChouhalNovember 2, 2021No Comments

Thirteen of Malta’s most promising have begun their international training commitments early with a week-long, high-intensity professional training camp in Formia, Italy. The camp is being managed by Athletics Malta consultant Antonio Laguardia and Technical Director Mario Bonello.

During their stay in Italy, the athletes are working in small groups allowing the coaches to focus on the athletes’ finer details. The coaches made available to the Maltese athletes are among the best and most experienced in their profession, and include the legendary Vitaly Petrov, who has coached no other pole-vault record holders such as Sergei Bubka and Yelena Isinbayeva. For pole-vaulter Nicolai Bonello it was certainly an experience to cherish for years to come, receiving one-to-one coaching by Mr Petrov.

The Olympic Training Centre in Formia, managed by the Italian Olympic Federation (CONI) has a long history of preparing top athletes for international events and comes with state-of-the-art technical equipment, experienced physiotherapists and nutritionists, as well astop-notch facilities for rehabilitation and testing equipment.

This training camp is one of five similar camps planned by Athletics Malta to prepare local athletes for a very busy season packed with high-profile international commitments, including World and European Championships, the Commonwealth and Mediterranean Games.

Athletics Malta President Andy Grech, who is leading the delegation in Formia said: “While our association will continue to organise similar international training camps to give our athletes with access to the best facilities available, it is our objective to invest in the necessary facilities and resources to be able to host such training camps locally. In this context, Athletics Malta has recently finalized plans for a smaller-scale refurbishment of the Matthew Micallef St John Stadium, a project which is fundamental for our efforts to support the development of local talent but also to attract international athletes thus enhancing Malta’s exposure to higher levels of sport, to the mutual benefit of all involved in the athletics community”. 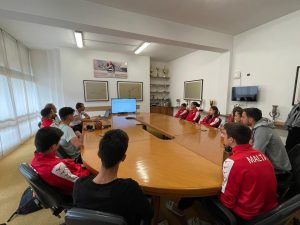