Malta is to host European Athletics Championships Third League on the 24th and 25th June.

This was announced by Malta Amateur Athletics Association President Edwin Attard during a press conference held this afternoon at the Associations’ headquarters in the presence of officials, athletes and the media.

Attard explained that this would be the fourth European Athletics event to be hosted in Malta.

Attard went on to explain the format of the European Team Championships which sees National Athletic Federations that are affiliated to European Athletics split into four leagues: the Super League, the First League, the Second League and the Third League.

Each league has 12 Federations and the competition will host 20 events for Men and 20 for Women. This year’s Championships will host the AASSE (Liechtenstein, San Marino and Gibraltar), Albania, Andorra, Armenia, Azerbaijan, Bosnia & Herzegovina, FYR Macedonia, Georgia, Kosovo, Luxembourg, Malta and Montenegro.  Team scores are calculated by combining the men’s and women’s points and the top two teams in the Third League will win promotion to the Second League.

It is the aim of the Malta AAA to field an athlete in each event. It is envisaged that there will be about 40 athletes representing Team Malta and it is expected that the team will be spearheaded by the likes of Charlotte Wingfield and Luke Bezzina who represented Malta in the 2016 Olympics. The full team will be announced by the 15th of June.

Attard went on to explain some of the preparations required to host such an event, where Malta is expected to host around 400 athletes and officials and provide accreditation for approximately 700 persons. Furthermore, there is ongoing collaboration with local and foreign organisations to ensure that services such as big screen, live streaming, photo-finish and false start equipment are catered for as per international standard requirements.

Apart from attracting new talent, it attracts the next generation of officials.  Last year’s Championships of the Small States of Europe were a recent example when over seventy volunteers from the ages of 12 to 70+ contributed their time and expertise to enable the event to be a success continued to underline Schwaiger.

In his closing remarks, Edwin Attard announced that an event specific website has been launched – www.malta2017.org and will be updated with developments in the run up to the event as well as include timely updates during the Championships. 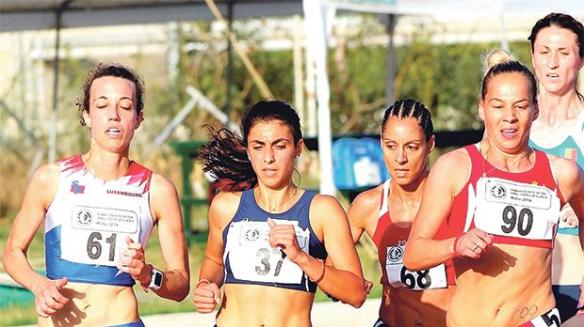 Perseverance is one of the names in the game as far as athletics is concerned. This is clearly manifested in the number of athletes past their youthful prime who doggedly keep up their training, their competition and their thirst for success. If proof is needed that perseverance pays, one does…

In athletics it’s not often that there is local mention about the pole vault. Indeed, albeit with the presence of a specialised coach, youngsters willing to take up this sport are few and far between, perhaps not encouraged by parents witnessing their off-spring scaling the heights. Not so for…