In December 2009, the Matthew Micallef St. John Athletics Stadium in Marsa was granted to the Malta Amateur Athletic Association on a 49-year lease contract that can be renewed for further periods.

Following the signing of this contract, detailed plans  for the development of the Marsa track and field facility (which includes an IAAF certified Class II 400m track and a warm-up track that measures 140m x 10m) into a High Performance Centre were drawn up.

The plans envisage the development of an area of over 2000 square meters that currently houses the warm-up track and the adjacent private road behind the stands of the athletic stadium.

In the proposed plan, the warm-up track will be turned into an indoor track, while the area above the indoor track and the private road is planned to provide facilities for accommodation, medical and scientific testing, massage, rehabilitation and physiotherapy. The centre will also include a gym and a restaurant area. The new facility can attract different markets. Such a centre will undoubtedly appeal to top sportspersons from different local sporting federations but will also be an attraction to the growing local fitness community. Not least, the centre will have vast potential in the area of Sports Tourism. Finally,it is not excluded that the large sports hall created can have additional business potential in other areas that are not strictly sports related and that the project can be of interest to both local and foreign entrepreneurs 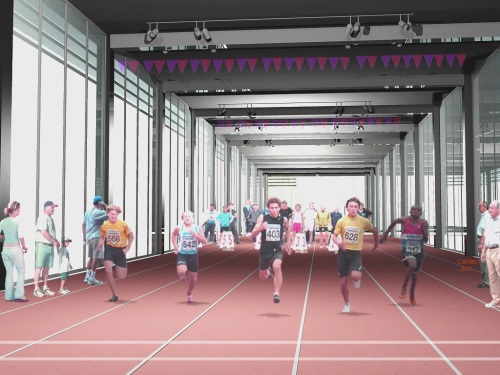 It is believed that current circumstances may favour the implementation of a project concerning the development of the Matthew Micallef St. John Athletic Stadium in Marsa. It is understood that such a project may not only qualify for EU funding in terms of the draft EU Cohesion Policy for the years 2014 -2020, but it appears that if Section 14 of the electoral programme of the current administration is implemented, then it is likely that sporting associations such as the Malta Amateur Athletic Association may be able to enter into public-private partnerships.

It is anticipated that changes to existing contracts between Government and sporting entities will in the near future allow the Malta AAA to issue a call for ‘An Expression of Interest’ for the development of the Marsa Athletics Stadium.