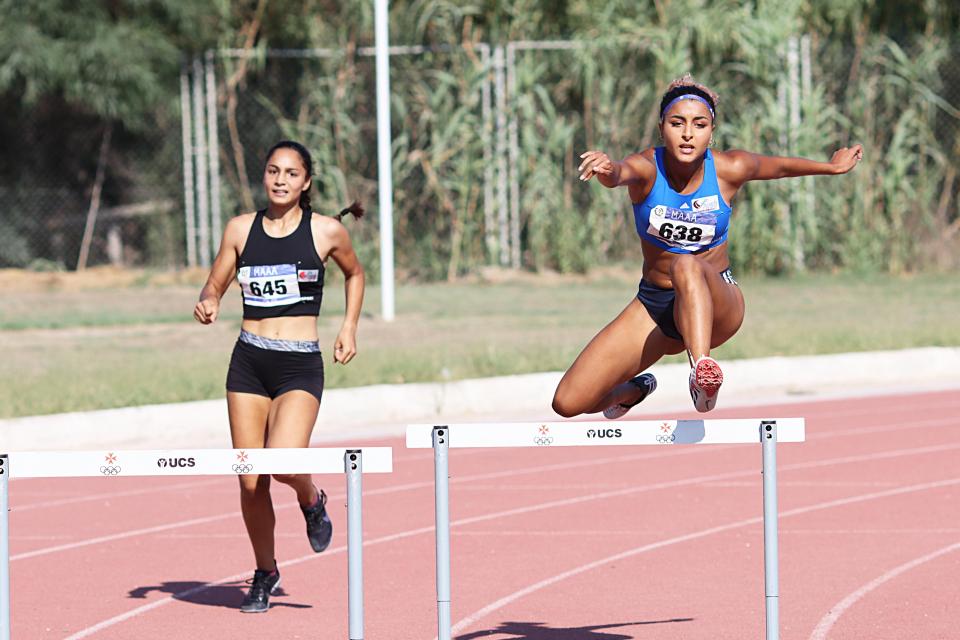 Anyone who expected a quiet afternoon at the Matthew Micallef St. John Athletics track yesterday, on the occasion of the final MAAA Challenge, was happily mistaken.
The event set off immediately with a promising start with another record-breaking 400 metres hurdles run by Sarah Chouhal, who managed to scrape off another 1.03 seconds of her national breaking time, pushing down the Under 20 and Under 18 national record to 1.05.93s.

The 100m offered an incredible finish with Luke Bezzina (St. Patricks) and Jacob El Aida Chaffey (Starmax) tying at 10.85, with Lloyd Mhiripiri (La Salle) clocking 10.94. The female short sprint was no different with Claire Azzopardi and Sarah Busuttil (both Pembroke Athlete) separated by 0.03 of a second. Azzopardi won this race in 12.23.
The most anticipated match up of the day was in the 1500m race where Dillon Cassar (Raptorz) and Jean Paul Debono (Zurrieq Wolves) put on an excellent show, complete with a fight to the finish. The two athletes alternated the lead throughout the race, but Cassar ended the race on top with a time of 4.02.16, with Debono close by in 4.02.50. Both athletes will be logging heads once again at the National Championships.

Winners of the 3000m, Charlton Debono (Evolve Endurance club) and Monalisa Camilleri (AS Libertas) led from start to finish in this race, both registering a personal best over the distance. Impressively, Camilleri was only a mere 4 seconds away from a 26-year-old National record at 9.43.91. The well-fielded race saw two Masters’ national records fall. Lisa Marie Bezzina (W40) and training partner Peter Azzopardi (M55), both hailing from Pembroke Athleta broke new ground by recording 9:58.04 and 10:02:18 respectively.
All athletes will now take a two-week rest, before pushing themselves one final time, before the curtain closes on what was a very exciting (albeit strange) athletic track and field season.
At the end of the event, Andy Grech, MAAA President commented: This was yet another challenging week for the Association which had to adapt to the evolving realities on the island ensuring maximum safety and security for all athletes and officials. We will now be putting all our efforts to deliver memorable National Championships in two weeks’ time.

Jacob El Aida Chaffey (Starmax) dominated the 200m in a time of 21.99.
At the same time, Claire Azzopardi (Pembroke Athleta) took to the triple jump. In her fifth jump she registered a season best of 12.67.
Luca MARTINI (Rush) threw his hammer 56.52 a mere 44cms away from his national record thrown a few weeks ago in micro-event 1. 56.95. Whilst Sarah Chouhal (Rush) threw a seasonal best in the hammer of 49.02m.