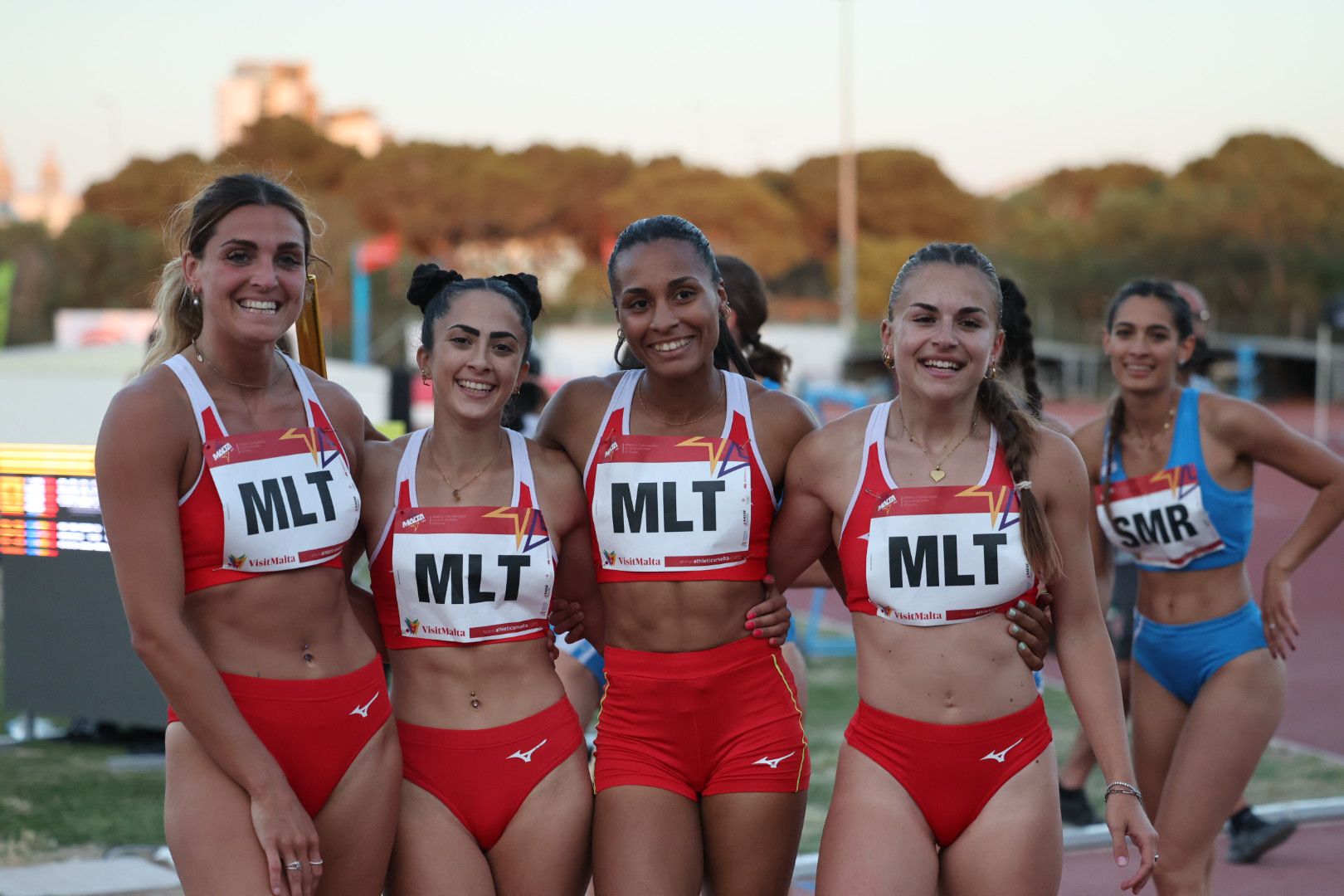 By Antonella ChouhalJune 12, 2022No Comments

Janet Richard, Claire Azzopardi and the women’s quartet were Malta’s star performers at the Championship for Small States at Marsa after striking gold in the 400m race, long jump and the Swedish relay respectively.

It was bright showing from Team Malta who fielded a blend of youth and experience who all contributed to the team’s cause and help the home contingent to an excellent second-place finish in the overall standings when amassing 110 points. They only finished behind Cyprus who topped the standings with 117 points with Moldova placing third with 99 points.

Richard claimed Malta’s first gold medal of the day in the 400 metres when clocking 55.12s, fending off the late challenge of Armenia’s GayaneChiloyan (55.64) despite the latter’s seasonal best.  Moldova’s Anna Berghii also set a seasonal best in finishing third on 56.57.“I am so ecstatic, the atmosphere here is amazing and racing on home soil is just a great experience. Today, I wasn’t racing for the time, but I was focused for the placing and to get Malta’s first gold medal feels just amazing,” Richard said. In the first heat, Martha Spiteri set a new personal best on her way to victory in a time of 58.29 seconds.

Claire Azzopardi managed a new personal best of 6.21 metres on her way to victory in the women’s long jump. Irma Gunnardsottir, of Iceland, was a distant second in 5.96 metres. Pantelisa Charalambous, of Cyprus, to bronze with 5.93 metres. “I have been working hard to get a new personal best and after months of hard work I finally nailed it. It was a thrilling experience to compete in front of the home crowd and to get the gold medal was a dream come through for me,” Azzopardi said. “Now we are halfway to next year’s GSSE and this result will surely motivate me to push more to continue reach better heights”, she added.

Malta’s final gold medal of the day came in the women’s Swedish relay when Azzopardi, Carla Scicluna, Charlotte Wingfield and Richard teamed up to dash home first in 2:10.37. Moldova claimed second in 2:14.05 while the bronze medal went to Iceland in 2:15.82.Earlier, the men’s quartet of Steve Camilleri, Beppe Grillo, Matthew Galea Soler and Ben Micallef almost emulated their female counterparts but had to settle for second place in 1:55.84.Moldova took gold in a time of 1:53.84.

Malta’s first medal of the day came from Daniel Saliba who matched his own national record when dashing home in 14.69 seconds to secure the silver medal in 110m hurdles race. Cyprus athlete Elvis Elli Krykov won the race in 14.30 with DurjonIdirzak, of Albania, settling for bronze in 15.72.“It is a great result for me personally,” Saliba said.

“We are still in the early months of the season but to clock a personal best now so early in the campaign is great particularly with more races to come this summer, including the Mediterranean Games in Oran.”

After a dramatic false start, the 100m served up the thrills as KolbeinnHodur Gunnarsson sprinted home in 10.59s, setting a new championship record in the process.  Malta’s Beppe Grillo finished in second place with an excellent 10.65s, slightly edging out Dagur Andri Einarsson of Iceland.“It’s a great result for me. I am very happy with my performance as the time achieved today was what my coach and I were looking for today. So, to get this time in these Games is quite special for me.”

Grillo just missed out on a medal in the 200 metres race when he had won his heat in a new personal best of 21.80.But it was Gunnarsson who completed a sprint double to take the race in 21.40 ahead of Stavros Avgoustinou, of Cyprus, who clocked 21.49 with Mindla Edeladze, of Georgia, taking bronze in 21.70.

In the women’s 100 metres race, San Marino’s Alessandra Gasparelli was the fastest athlete in a very competitive field, winning in 11.67s, beating out Cyprus’ Marianna Pisiara and Iceland’s Tiana Osk Whitworth. For Malta’s Carla Scicluna there was the satisfaction of a personal best of 11.85.

Charlotte Wingfield won the bronze medal in the 200 metres when placing third overall in 24.41. Olivia Fotopolou, of Cyprus, took gold in 23.04 ahead of Tiana Whitworth, of Iceland, who finished the race in 24.25.

In the pole vault, Peppijna Dalli managed to come away with a medal despite changing her pole just before the start of the competition. Dalli leapt to 3.60 metres to secure a bronze medal. Moldova’s Angelina Zhuk-Krasnova took gold with a best leap of 3.80 metres while AntreaVasou, of Cyprus, secured the silver medal with 3.70 metres. “I am really happy with my performance today in an event that had some quality athletes in it,” Dalli said. “Today, I changed my pole just before the start of the competition and no doubt that there is great potential in me to continue jump much higher in the near future.”

Dillon Cassar managed to grab a medal in the 5,000 metres when placing third in the men’s race in a season best of 14.45.13.“This is a very encouraging result for me particularly since it’s in the middle of my preparations for the half marathon at the Mediterranean Games,” Cassar said. “I was facing a field where the majority of the athletes were better than me on the track but I kept fighting and I am really happy to go home with a medal in the bag. It’s not my fastest time but I am on track to reach the level of performances I aspire to.”

Moldova’s Lilia Fisikovic ran a race on her own on her way to victory in the women’s event, crossing the finishing line in a time of 16 minutes 42 minutes and 11 seconds. Malta’s Roberta Schembri (17:23.66) claimed bronze.